Several of you inquired about the donkeys and how they’re doing.

Beatrice– She’s made major improvements in letting me touch her. The back hoofs are still off limits, though.

Cece– Poor girl. She’s had a rough few months after delivering Dusty. Her health declined and she was agitated most of the time. One evening while putting her hay down, she reached out and bit me in the shoulder. I called Barbara and we discussed what to do. Cece has now been on an increased diet of hay, supplements and vitamins. Her health has gotten better and because of that…her mood is better, too.

Audrey– She has a lot of energy and needs to have some sort of purpose. I had started clicker training (more on this later) but her lessons slowed down after Dusty was born. She became bored and started girdling a tree in the paddock. The tree trunk is now covered in a tarp…much to Audrey’s disappointment.

Dusty– He’s growing up fast. Although he gets a lot of his nourishment from nursing, Dusty began eating out of Cece’s morning feed bucket. He now has one of his own which makes him feel like a big donkey.

Thing- An isolated tornado ripped through our area bringing down a hundred trees. Audrey inspects the massive root ball of one tree that fell behind our barn.

We all have romanticized images of farm life.You know…the fashionable woman from Vogue holding a pitchfork with nary a stain or rip in her attire. Well, you can forget that. The reality is this. I get up at 6 am with bed hair. While still half asleep, I put on a pair of beat-up old jeans, cotton shirt, sweat jacket and wool socks. Just as I’m heading out the back door, I manage to slip my feet into black muck boots. For morning chores (the next two and half hours) I work feeding the donkeys, brushing them, doing their hoofs and cleaning up a whole lot of manure. There’s no way anyone can do that in a pair of stiletto heels. :)

On The Farm- Meet Our Donkeys: Cece, Beatrice, Audrey & Dusty

Back in 2008, I wrote a fun post about wedding changes I would make. Looking at the post now, it seems a bit out of step. What’s the difference? A desire to have an even smaller and more intimate wedding. 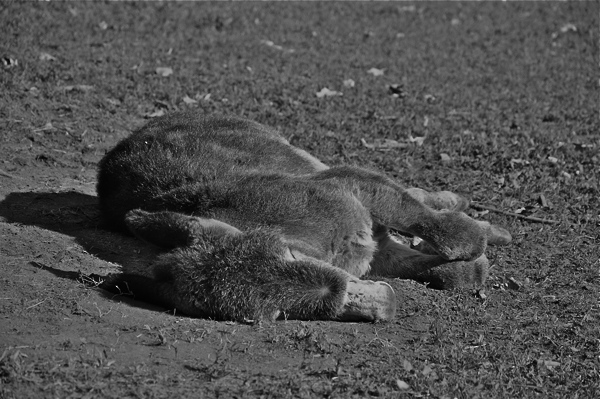 Dusty is our youngest donkey (just over a month old) and very high-spirited. He spends his time running, jumping and kicking until he’s finally exhausted. Then he collapses onto the nearest dirt pile and falls asleep. He’s absolutely still except for the occasional swish of his tail batting the flies away.

Donkeys At The Door

As a novice farmer, last week was hard. I scheduled visits from both the vet and the farrier, who clips donkey hoofs. Tuesday, the vet came to check our trio of female donkeys and draw blood from the oldest named Cece. That crazy donkey knew something was up. She resisted putting on her halter and lead rope. After some coaxing with carrot treats she was persuaded. But the moment the needle went into her neck…she exploded. She ran around me while I held onto the lead. The needle fell to the ground. Cece was finished and so was I. 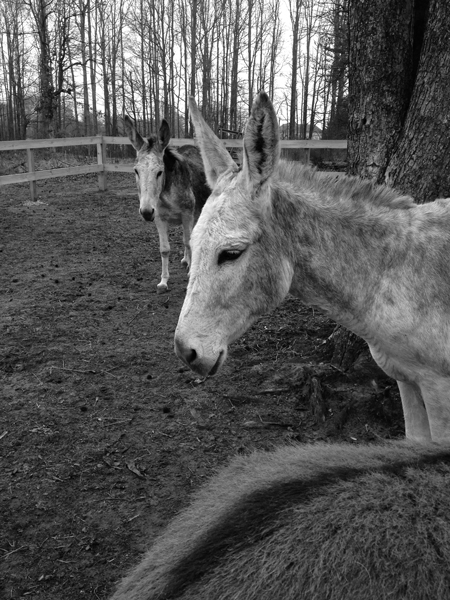 While the vet was packing up, I mentioned that the farrier was coming the next day. She suggested a low dosage of sedative for both Cece and Beatrice. An hour before the farrier came, I gave the two donkeys their sedatives. It didn’t take long for it to take effect. They could barely stand. The farrier began to work on Beatrice’s hoofs and, with some minor kicks, was able to accomplish his task. Then came Cece. She was drugged enough to fall over but somehow had enough where-with-all to snort and kick. There was no way he could trim her without being hurt. Meanwhile, almost a year old Audrey was watching how “proper” adult donkeys behave. And even though she had let him clip her hoofs, problems started up. By Friday, Audrey wouldn’t even let me clean them, and instead gave me a few warning kicks. Doing her hoofs had never been an issue before! After that, I came in the house, threw myself on the bed and cried. 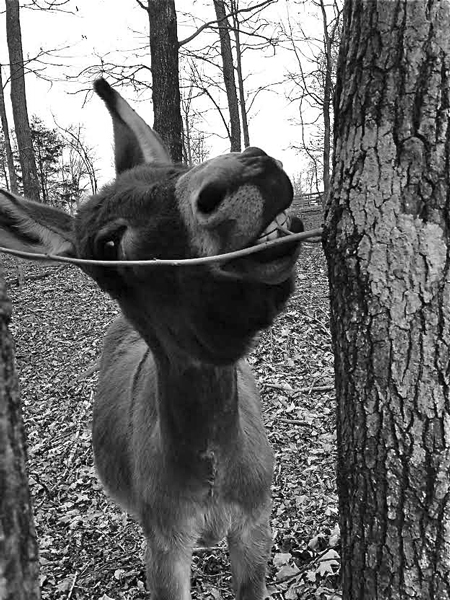 While Cece and Beatrice prefer to quietly graze, Audrey likes to explore the woods behind our barn. We can’t see what she’s doing, but we can hear her running through the leaves creating her own paths. Audrey’s latest antic is digging. Usually she does this at night and leaves her treasure by the back gate. The loot consists of broken branches, bark with the occasional scraps of paper or plastic bags. One morning I was up early and saw Audrey coming from the woods with something big in her mouth. At first I thought it was a plant with roots. As she got closer, it turned out to be a piece of shag carpet.

Where Beatrice is an aloof donkey, her eight month old foal, Audrey, is the complete antithesis of that. She’s affectionate, not to mention very curious and full of energy. Audrey has never experienced physical abuse like her mother so she’s trusting of people…except for maybe the farrier. She’s not too keen letting him clip her hoofs.

On The Farm- Meet Beatrice

On The Farm- Meet Cece

Out of our three donkeys, nine year old Beatrice is the most difficult to handle. As with animals that have been abused, she carries with her emotional and physical scars. Beatrice was at some point starved. Food is now a HUGE issue. She was also mistreated. This has left her overly fearful and cautious. Taking on a rescue donkey like her is risky. Will Beatrice recover? I honestly don’t know.

On The Farm- Meet Cece

Donkeys At The Door

A picture of our son when he turned nine years old. For his birthday he requested balloons, gifts wrapped in his favorite color red and a dog cake.